Mr. Robert Kelly has been a client of Premier Home Health Care services since December 2007, after an unfortunate motor vehicle accident, which caused severe damage to his physical and mental health and well-being.  After multiple surgeries and lengthy hospital stays, Mr. Kelly lost all hope and was depressed. 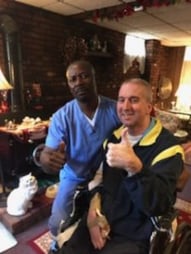 It wasn’t until Mr. Kelly returned home and undertook intense physical therapy with the care and support from the Premier Home Health Care aides, Yaw Tenadu and Alan Richardson.  Mr. Kelly saw a glimmer of hope through their endless positive thinking and willingness to continue his daily therapy, which enabled Mr. Kelly to overcome many strenuous hurdles.  Both of our aides worked tirelessly with Mr. Kelly to feel comfortable communicating his wants and needs in a way they would be able to understand.

Over time Mr. Kelly was so excited to see the aides each day and know they would work with him on his ongoing physical therapy routine which allowed him to learn how to use the TV remote again and turn on his hip hop music - this lifted his spirits every day! Mr. Kelly and his mother, Mary, praise both of the aides for all their hard work and the respect they have shown to her and her son. Ms. Kelly is so impressed with her son's new found socialization skills which he may not have restored without the dedication of his aides, Yaw and Alan. 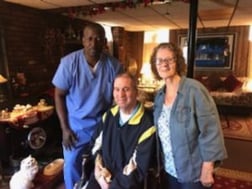 Through this long and arduous process, Mr. Kelly is now able to take small trips to the mall as well as stand with minimal assistance! As we can see nothing is impossible when you have a great healthcare team which includes our well trained and compassionate home health aides! Bravo to all!

Making a Difference in Asheville, NC

In Asheville we are blessed with several service lines.  Everything from Medicaid funded programs,...
Read More

As Aging Today reports, “Those living in multigenerational households admit there are challenges...
Read More

Many patients who return home from the hospital following a fall or surgery, such as hip...
Read More